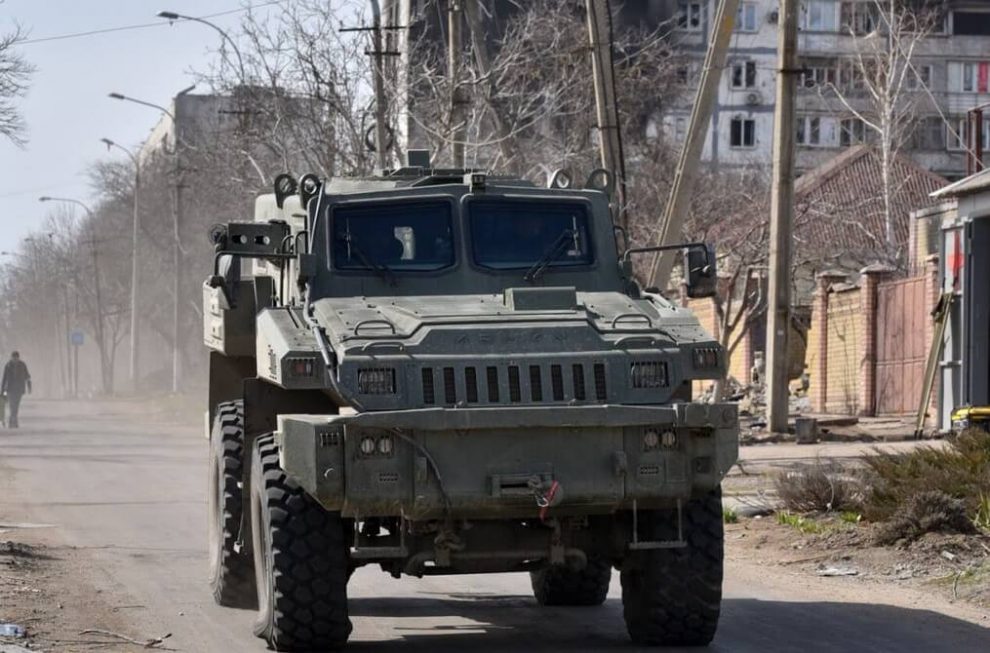 The Kazakh oligarch Kenes Rakishev has been linked to an armored vehicle recently spotted in the hands of Chechen troops invading Ukraine.

The self-styled venture capitalist is estimated to be worth $950 million and seven years ago he helped to set up a factory in Kazakhstan that produces Arlan Marauder (MRAP) vehicles.

One of these military vehicles was seen in the bombarded Ukrainian city of Mariupol in early April. It was being driven by Chechen forces loyal to Russia’s President Vladimir Putin.

Rakishev is close friends with Chechen warlord Ramzan Kadyrov, who has previously described the oligarch as his “dear brother”. This close relationship with Kadyrov has prompted speculation that Rakishev may have been instrumental in supplying the armored vehicle to the Chechen troops.

Kenes Rakishev joined the board of Kazakhstan Engineering in 2014 and is credited as the architect of the joint venture with Paramount Engineering. He also oversaw the construction of the Arlan armored vehicle factory in Kazakhstan.

Construction at the Kazakh armored vehicle plant began in December 2015 and, shortly after, Rakishev vacated his seat on the Kazakhstan Engineering board to allow his father-in-law, Imangali Tasmagambetov, a former Kazakh prime minister, to take over.

Sightings of the Arlan and Rakishev’s closeness to Chechen leader Ramzan Kadyrov have sparked suggestions that the oligarch played a role in supplying the armored vehicle. This could make Rakishev a target for US and EU sanctions for aiding Russia’s invading troops.

Rakishev and Kadyrov enjoy a longstanding friendship and have been photographed dressed in Chechen military gear and embracing one another. Kadyrov’s notoriety has grown in recent months after he pledged his forces’ support to Russian President Vladimir Putin’s invasion of Ukraine.

Kadyrov has been accused of an array of human rights abuses including torture, forced disappearances, and extra-judicial killings, which Human Rights Watch said constituted crimes against humanity.

Rakishev reportedly offered to bankroll the construction of Kadyrov’s luxurious palace in Grozny and even organized for Belgian actor Jean-Claude Van Damme to fly over to celebrate the capital city’s birthday.

It was reported that Rakishev had initially tried to secure footballer Cristiano Ronaldo for the celebrations in Grozny but was advised that the €1 million costs to fly him to Chechnya would be too expensive.

Instead, he settled on Van Damme, best known for starring in a string of martial arts movies. The weekend also included Hollywood star Hilary Swank and British singer Sting. Kadyrov has awarded Rakishev the “Order of Kadyrov” for his friendship.

Rakishev is regarded as one of Kazakhstan’s most controversial oligarchs due to his close relationship with scandal-tainted friends. In addition to Kadyrov, Rakishev is also friends with Moshe Hogeg, an Israeli businessman accused of fraud, and Hunter Biden, the disgraced son of US President Joe Biden.

Rakishev was also reportedly questioned by the Kazakh authorities earlier this year over his support for Arman Dzhumageldiev, a gangster known as ‘Arman the Wild’ in the Kazakh underworld. Dzhumageldiev was arrested in January on suspicion of orchestrating riots that swept the country in protest against the government.