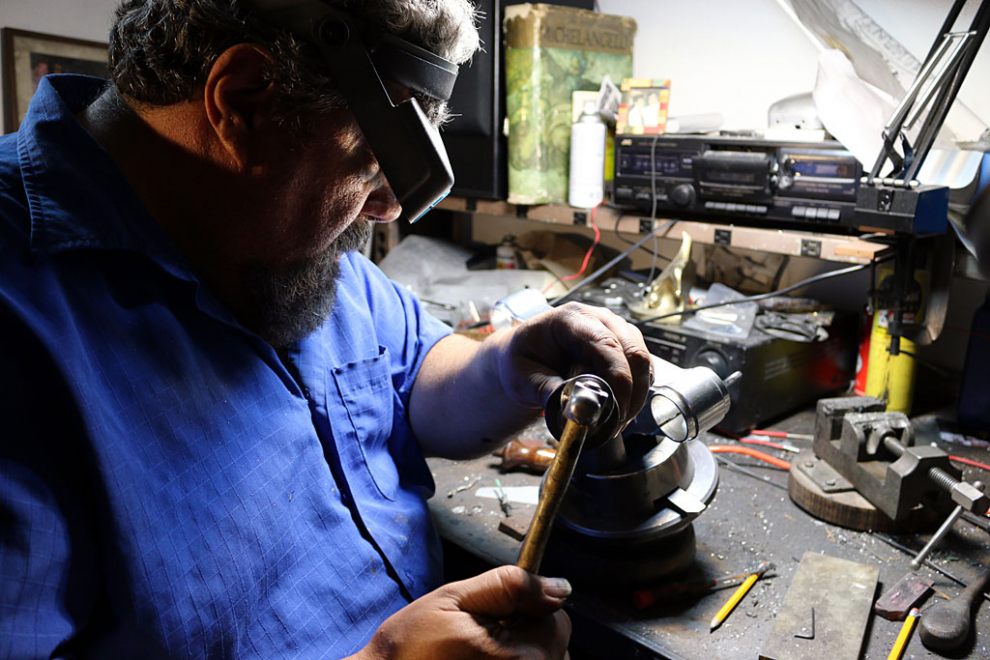 The artwork comes one tap of a hammer at a time on a chisel at just the right angle, a metal shard curling up with each controlled blow. The blows are measured, as is the angle and depth of the cut, the knowledge subconsciously ingrained by thousands upon thousands of hammer strikes and channeled through thick fingers. Tay Herrera’s ability to create masterpieces on metal draws upon the skills of the masters he’s learned the craft of hand engraving from. The artwork manifests on a multiplicity of canvases, from a dragon on an Indian Larry Motorcycles’ cam cover to a samurai on the tank of Bryan Fuller’s “Shogun” to comedy and tragedy masks on the Knucklehead rocker boxes of Trevelen’s “El Peligroso.”

“I was an artist, always have been,” said Herrera.

But he wasn’t always an engraver. In fact, Tarrera, the name Tay’s known by in the industry, was leaning toward becoming a tattoo artist. His family though wanted no part of that. One day Tarrera’s dad said “Hey, you want to take a cruise with me to Chatsworth and check out a friend of mine?” It took some convincing to get the teenage Tarrera to go, but he finally caved in to his dad’s request. The decision changed his life.

When they arrived at the house of his father’s friend in Simi Valley, Tarrera watched wide-eyed as the man inlaid gold on a Purdey shotgun with a hammer and chisel.

“What the … No way! I was blown away by this art form,” said Tarrera.

Turns out his father’s friend was master firearms engraver Angelo Bee who once served as the engraver at Fabrique Nationale d’Armes de Guerre in Liege, Belgium.

“I’d never seen the art form before and to be hit in the face like that, all these different emotions at the same time. I thought, this is it, I want to learn this. This was way beyond anything else.”

Before leaving, the inquisitive young artist asked Bee if he could come back and watch him. Tarrera remembers Bee saying “Sure, come on by” in a thick French accent. So Tarrera made the trip across the valley for about six months just to watch him work. Finally he asked Bee if he would show him the process. The accomplished engraver gave Tarrera a book, a study book from Liege of drawings and practice plates, along with a chisel.

“I just went to work. I practiced engraving those plates and designs, over and over again. It was really difficult though. I’d go back and he’d show me what to do and that went on for years,” said Tarrera.

Like his mentor, he first plied his craft on handguns. Turns out his father made custom gun cases.

“He did work for Ronald Reagan, Clint Eastwood, Arnold Schwarzenegger, he knew everybody. That was our connection with Bee. Angelo had engraved something for Sylvester Stallone or somebody like that and my dad made the case.”

Despite the list of high profile clients, Tarrera said his father’s woodshop struggled to make ends meet. So he did gun shows with his dad for two or three years as he continued to learn the craft, admitting that “I wasn’t ready. I used to compare my work to other engravers and I could see it, this sucks. I was still developing my eye.”

Tarrera developed that eye by continuing to seek the tutelage of masters of the craft.

“I wasn’t lazy about it. I traveled quite a bit to wherever I needed to learn.”

This included a trip up to Lassen College in Susanville, California, to take a one-week NRA class taught by two well-known American masters, Frank Hendricks and Ron Smith.

“I absorbed everything. Those guys were hammer and chisel guys like me and I was just blown away. They had two completely different styles of teaching.” Later he would take a class taught by another master craftsman, Sam Alfano, to learn fine lines and microscopic work.

The transition to using motorcycles as a canvas began when he did some work on a Moto Guzzi for a friend. Around the same time, the Discovery Channel started airing shows like Biker Build-Off and Monster Garage, further fueling the flames to work on motorcycles.

In 2003 Tarrera took a trip to New Orleans where he showed an exhaust pipe he had engraved to Orange County Choppers, Dave Perewitz and others.

“Perewitz was like, ‘Yeah I seen this before, we used to do this in the ’70s, here you go’ and handed me back the pipe,” laughed Tarrera. Despite his efforts, nobody at the show was interested.

But Tarrera didn’t give up. “I went to Matt Hotch, Chica, Johnny Chop. Me and Johnny became good friends and I did some work for him.

“I finally said screw it, I’m gonna call West Coast Choppers. I swear, they were the last ones. So I called up and Bill Dodge answered the phone. I told him I’m an engraver and this is what I do and Bill said come on down.”

Surprised by Dodge’s reply, Tarrera took the pipe down to the shop and showed it to Dodge and Chopper Dave.

“They’re all looking at it, they’re looking at me. And Chopper Dave goes ‘Can you go deeper?’ Yeah, here’s a piece right here. They keep staring at me and back to the pieces and talking, I don’t know what they’re talking about. They leave so I go downstairs and that’s when Bill says, hey, you want to go exclusive?”

Tarrera’s work got a big boost with the national exposure it received from the Biker Build-Off episode that included Trevelen’s aforementioned “El Peligroso.” Since then, the list of high profile clients he’s done work for is long. This summer, Tarrera had three pieces featured in Michael Lichter’s “Skin & Bones: Tattoo Inspired Motorcycles and Art” exhibit in Sturgis. More recently, his work again hit the TV screen on a bike he engraved for the Discovery Channel show “Sacred Steel Bikes.” He’s also maintained a healthy relationship with Jesse James engraving guns for his company Jesse James Firearms Unlimited. In fact, Tarrera was busy scrolling a stainless slide for a JJFU .45 Caliber 1911 pistol when we visited.

With the demand for his work, deadlines can sneak up quick. Luckily, Tarrera is always up to the task.

“An extra push helps sometimes. There are times I’m looking at it and think, man, this has never been done, projects I’m doing, this has never been done. And I’ve got to figure it out thinking how in the hell am I going to do this? And it’ll keep me up, it’ll keep me up. When the time comes, when that thing’s talking to me, saying OK let’s get it, I figure it out. Every time. You’ve gotta, you have to wait till he project talks to you at those moments, you can’t force yourself.”

Projects aren’t the only one’s speaking to Tarrera. He also hears those who helped him become a master engraver because even after 36 years he says “I still have a lot to learn.”

“Frank Hendricks used to talk about the scroll work, as number one, and it’s very true, that backbone. Because if you flip it over and move it around you’ll notice now it’s kind of an oval, this side’s a little heavier. Spin it around and fix it and pretty soon it’s cylindrical and that’s how you fix a scroll. Because of him, I never forgot that. When I’m working, I still hear him. I hear everybody. They say ‘What are you doing?’” he laughed.

What he’s doing is creating incredible three-dimensional artwork that blends both iconic biker imagery with renaissance-like reliefs, scrolls and leafing. In a day of computer programs and laser etching, he continues to carry on a time-honored tradition, engraving metal one tap of a hammer at a time by hand because for Terrera “the artwork comes first.”