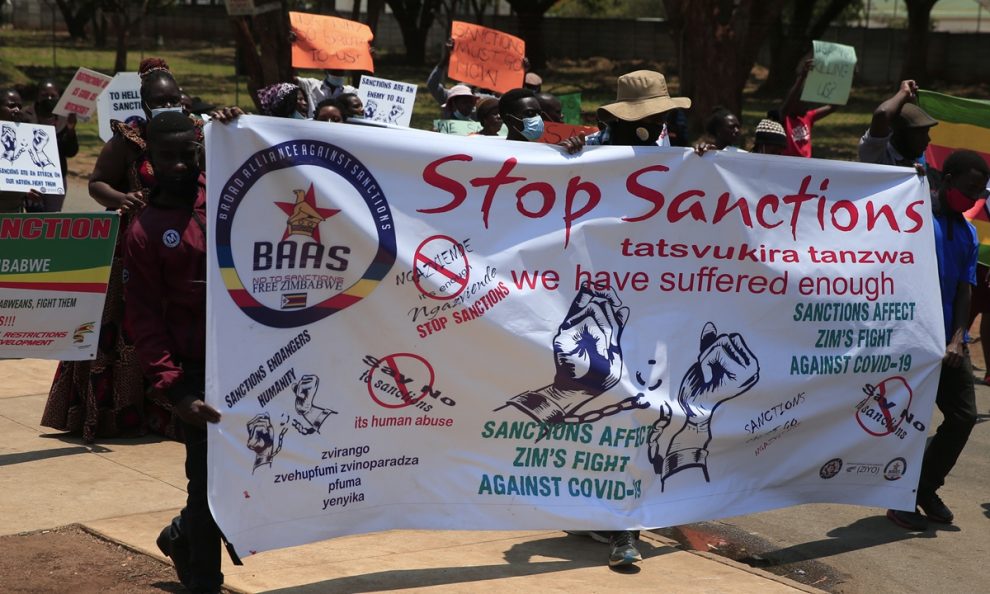 African leaders have called for the removal of sanctions imposed on Zimbabwe by a law the United States Congress passed in 2001, during late Zimbabwean president Robert Mugabe’s regime.

At the recent United Nations General Assembly (UNGA77) in New York, South African President Cyril Ramaphosa and African Union chairperson Macky Sall, who is also the president of Senegal, spoke about the need to remove the restrictions imposed by the Zimbabwe Democracy and Economic Recovery Act of 2001 (Zedera).

Over the past three years, the Southern African Development Community (SADC) has marked 25 October as Zimbabwe Anti-Sanctions Day, hosting solidarity marches in cities across the region.

However, the sanctions in Zimbabwe have divided opinion.

Members of the ruling party claim the restrictive measures have a direct effect on ordinary civilians and frustrate policy space for the government’s development plans.

But the opposition, which is accused of calling for sanctions on the country, feels the ruling party is using the sanctions as an excuse for its political failures and for political mileage.

According to the US Embassy in Zimbabwe, the sanctions are “targeted financial sanctions against select members of Zimbabwe’s ruling elite for undermining democratic processes, abusing human rights or facilitating corruption”.

Thus, the US has, in the past, made it clear that it supports Zimbabweans’ push for the restoration of democracy, respect for human rights and better governance, as defined in the country’s 2013 constitution.

The US Embassy argues that “sanctioned members of the ruling elite continue to undermine Zimbabwe’s democratic processes and institutions, commit human rights abuses related to repression, and engage in corruption.

“For these reasons, successive administrations have renewed the sanctions against those who continue to undercut Zimbabwe’s democracy.”

The long-held argument by the ruling party is that sanctions negatively affect trade and investment.

However, the US says that’s not true.

“US sanctions against the ruling elite do not block trade and investment with non-sanctioned individuals and entities. At present, 83 individuals and 37 entities are designated under the Zimbabwe sanctions programme,” Molly Phee, US State Department Assistant Secretary for African Affairs argued in an op-ed in March this year.

Data shows that trade between Zimbabwe and the US stands well above R1.4 billion and that as of last year, there was a US Department of Commerce-supported trade mission to Zimbabwe.

In comparison, this is more than Zimbabwe’s export receipts to Botswana (R651 million) and exports to Zambia (R1.2 billion) according to figures from the Observatory of Economic Complexity (OEC).

Since Zimbabwe’s independence in 1980, the US has been the single-biggest donor country.

It accounts for R59.5 billion, covering health, humanitarian and development assistance, such as agriculture and livelihood sustainability.

For the Covid-19 pandemic, the US provided more than R816 million in support.

The US argues that for sanctions to be removed, “the Mnangagwa government can show the world that its citizens live in a safe, prosperous, equitable country regardless of their political views”.

“Let all Zimbabweans feel free to offer their fullest potential and work to build a stronger, more prosperous and more inclusive society.”

What is ‘community resilience’? Responding to COVID-19 in rural Zimbabwe
Simon Mann warns Africa in danger of becoming ground zero for extremists