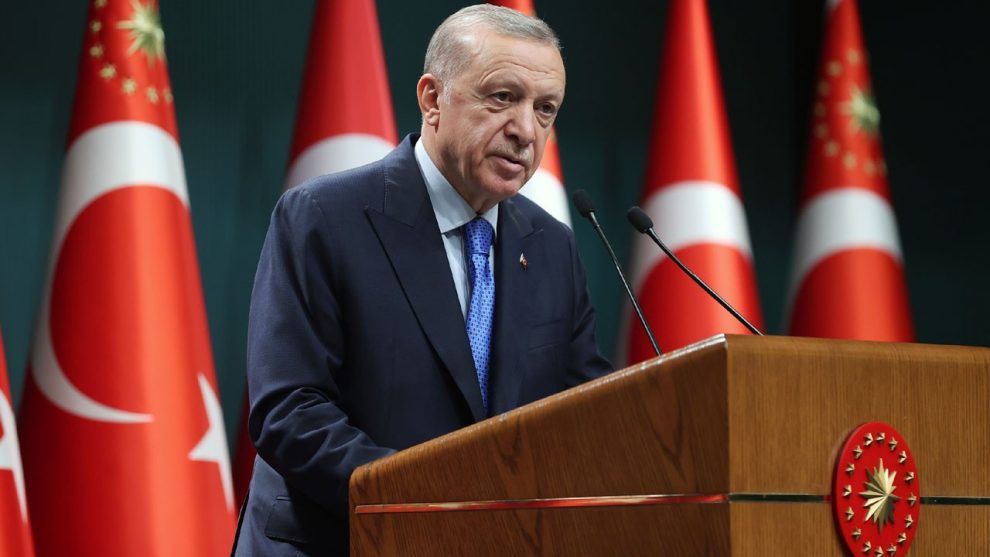 President Recep Tayyip Erdoğan is slated to pay a two-day visit to Kazakhstan on Wednesday to attend a regional summit and hold talks with his Kazakh counterpart and participating leaders, including Russian President Vladimir Putin.

It is expected that concrete steps will be taken to expand the strategic partnership relations between the two countries during Erdoğan’s official visit to Kazakhstan on Oct. 12-13, symbolizing the new era of bilateral relations with Kazakhstan President Kassym-Jomart Tokayev, who made official contacts in Ankara for the first time in May.

Erdoğan and Tokayev will hold one-on-one talks and attend inter-delegation meetings in the capital Astana to discuss bilateral relations and international issues after an official welcoming ceremony.

The presidents will also attend a high-level strategic cooperation council meeting to enhance the political, economic, cultural and defense ties.

Erdoğan’s visit to Kazakhstan, who will also attend the Conference on Interaction and Confidence Building Measures in Asia (CICA) to be held in Astana, will also be important in terms of political relations between the two countries.

The two-day summit will address political, economic, humanitarian and environmental issues, as well as new challenges and threats.

Since Erdoğan’s last visit in 2017, Kazakhstan has been experiencing a new political and socioeconomic process that came with the change of power.

This year, Türkiye and Kazakhstan celebrated the 30th anniversary of establishing their diplomatic relations.

Türkiye was the first country to recognize the declaration of independence of Kazakhstan, which was a part of the former Soviet Union for about 70 years and gained its sovereignty with the dissolution of the union.

Kazakhstan established diplomatic relations with Türkiye in March 1992, about two months after officially announcing its independence.

Thus, Türkiye opened its embassy in Almaty, the country’s capital at that time, and pioneered the establishment of the first diplomatic mission in independent Kazakhstan. Kazakhstan also set up its embassy in Ankara in the same year. In 2009, bilateral relations gained the status of strategic partnership.

Kazakh Foreign Ministry spokesperson Aibek Smadiyarov said on Monday that 11 heads of state, including from Azerbaijan and Palestine, would be attending the summit.

Established in 1992, the CICA is a multi-national Asia-focused forum with 27 member states and more than 10 other countries and inter-governmental organizations with observer status.

On the sidelines of the summit, Erdoğan is expected to hold bilateral talks with participating leaders, including Putin. They will meet on Thursday to discuss Ukraine and bilateral relations, the Kremlin said on Tuesday.

Commenting on the possibility that Türkiye could host talks between Russia and the West, Russian Foreign Minister Sergey Lavrov also said Tuesday that Moscow would be willing to listen to any suggestions but could not say in advance whether this would lead to results.

He said Erdoğan would have an opportunity to put proposals to Putin when both visit Kazakhstan.

Lavrov noted that direct talks between Russia and Ukraine had broken down at the end of March. Ukrainian President Volodymyr Zelenskyy has ruled out talking to Putin after Russia claimed the annexation last month of four Ukrainian regions that it partly occupies.

Türkiye, which has stayed neutral throughout the conflict in Ukraine, has good relations with its two Black Sea neighbors – Russia and Ukraine. Erdoğan met Putin on the sidelines of a regional summit in Uzbekistan last month. He still hopes to bring Putin and Zelenskyy together for truce talks.

Most recently, Türkiye enabled a prisoner swap between the warring countries. Also, Turkish mediation proved vital in facilitating the signing of a deal between Türkiye, the United Nations, Russia and Ukraine in Istanbul to reopen certain Ukrainian ports to release grain that had been stuck for months because of the ongoing Russia-Ukraine war – a development that has been crucial in responding to a growing global food crisis.

Türkiye is one of the most active countries working to ensure a permanent cease-fire between Ukraine and Russia. Its delicately balanced act of assuming a role as a mediator by keeping communication channels with both warring sides open provides a glimmer of hope in diplomatic efforts to find a solution and achieve peace in the Ukraine crisis. With its unique position of having friendly relations with both Russia and Ukraine, Türkiye has won widespread praise for its push to end the war.

Since the beginning of the conflict, Ankara has offered to mediate between the two sides and host peace talks, underlining its support for Ukraine’s territorial integrity and sovereignty. While Ankara has opposed international sanctions designed to isolate Moscow, it also closed its straits to prevent some Russian vessels from crossing through them.

Despite being on opposing sides, Türkiye and Russia also lead efforts for a solution in Syria. The Astana Process was launched in 2017 in a bid to restore peace and stability in the Arab country, which has been ravaged by war since 2011, when the Bashar Assad regime cracked down on pro-democracy protesters.

On July 19, Erdoğan, Putin and Iranian President Ebrahim Raisi held a trilateral meeting in Iran’s capital Tehran. The leaders gathered for the seventh summit in the Astana format to discuss recent developments in Syria; the fight against terrorist groups, which pose a threat to regional security, particularly the YPG/PKK and Daesh, the humanitarian situation; and the voluntary return of Syrians.

Despite pledging to retain calm on the ground during the meeting in Tehran, Russia and its ally Assad have frequently attacked the country’s northwest. Russia joined Syria’s 10-year conflict in September 2015, when the regime’s military appeared close to collapse, and has since helped in tipping the balance of power in favor of Assad, whose forces now control much of the country. Hundreds of Russian troops are deployed across Syria and they also have a military air base along Syria’s Mediterranean coast. While Iran and Russia support Assad, Türkiye has been supporting the opposition. Türkiye has also vowed a new operation to address its security concerns regarding the ongoing threat of terrorism.